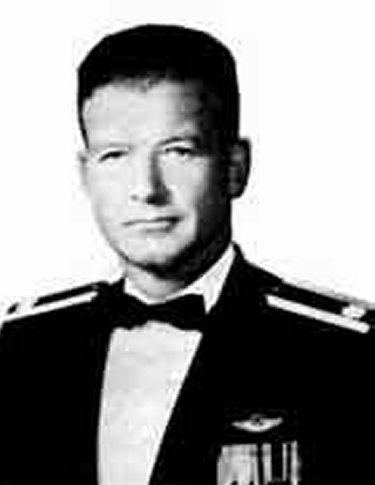 For conspicuous gallantry and intrepidity in action, at the risk of his life, above and beyond the call of duty, Colonel William A. Jones III distinguished himself as the pilot of an A-1H Skyraider aircraft near Dong Hoi, North Vietnam. On that day, as the on-scene commander in the attempted rescue of a downed U.S. pilot, Colonel Jones’ aircraft was repeatedly hit by heavy and accurate anti-aircraft fire. On one of his low passes, Colonel Jones felt an explosion beneath his aircraft and his cockpit rapidly filled with smoke. With complete disregard of the possibility that his aircraft might still be burning, he unhesitatingly continued his search for the downed pilot. On this pass, he sighted the survivor and a multiple-barrel gun position firing at him from near the top of a karst formation. He could not attack the gun position on that pass for fear that he would endanger the downed pilot. Leaving himself exposed to the gun position, Colonel Jones attacked the position with cannon and rocket fire on two successive passes. On his second pass, the aircraft was hit with multiple rounds of automatic weapons fire. On round impacted the Yankee Extraction System rocket mounted directly behind the headrest, igniting the rocket. His aircraft was observed to burst into flames in the center fuselage section, with flames engulfing the cockpit area. He pulled the extraction handle, jettisoning the canopy. The influx of fresh air made the fire burn with greater intensity for a few moments, but since the rocket motor had already burned, the extraction system did not pull Colonel Jones from the aircraft. Despite searing pains from severe burns sustained on his arms, hands, neck, shoulders, and face, Colonel Jones pulled his aircraft into a climb and attempted to transmit the location of the downed pilot and the enemy position to the other aircraft in the area. His calls were blocked by other aircraft transmissions repeatedly directing him to bail out, and within seconds his transmitters were disabled, and he could receive only on one channel. Completely disregarding his injuries, he elected to fly his crippled aircraft back to his base and pass on essential information for the rescuer rather than bail out. Colonel Jones successfully landed his heavily damaged aircraft and passed the information to a debriefing officer while on the operating table. As a result of his heroic actions and complete disregard for his personal safety, the downed pilot was rescued later in the day. Colonel Jones’ profound concern for his fellow man, and at the risk of his life above and beyond the call of duty, are in keeping with the highest traditions of the U.S. Air Force, and reflect great credit upon himself and the Armed Forces of his country.