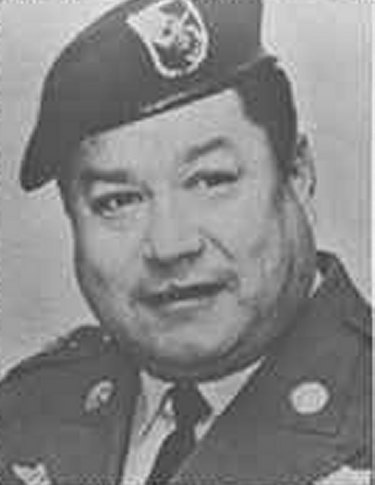 MASTER SERGEANT ROY P. BENAVIDEZ, UNITED STATES ARMY, then Staff Sergeant Benavidez, distinguished himself on 2 May 1968 when a 12-man Special Forces Reconnaissance Team from Detachment B-56, 5th Special Forces Group (Airborne), 1st Special Forces, was inserted by helicopters in a dense jungle area west of Loc Ninh, Republic of Vietnam. They met tough enemy resistance, and requested emergency extraction. After attempted extractions were driven off by intense small arms and anti-aircraft fire, Sergeant Benavidez volunteered to assist in another extraction attempt. He directed the helicopter to a clearing approximately 75 meters from their location. Disregarding his own safety, he jumped from the hovering helicopter and, under withering small arms fire, ran to the crippled team. Though wounded in the right leg and head, he took charge, repositioning the team members and directing their fire to facilitate the helicopter’s landing. He then carried and dragged the wounded and dead team members to the awaiting helicopter but he was again severely wounded in the abdomen and back while trying to recover the team leader’s body. At the same time, the helicopter pilot was mortally wounded, and the aircraft crashed. Making his way to the wreckage, Sergeant Benavidez pulled the wounded from the aircraft and gathered the stunned survivors into a defensive perimeter. Moving around the perimeter under withering automatic weapons and grenade fire, Sergeant Benavidez distributed supplies, and instilled the will to fight in them. Sergeant Benavidez called in tactical air strikes and directed gunship fire to permit another extraction attempt. While administering first aid to a wounded team member, he was again wounded in his thigh. Returning to the helicopter a second time with wounded, he was clubbed from behind by an enemy soldier engaged in hand-to-hand combat, sustaining additional wounds to his head and arms before killing his adversary. Under devastating fire, he continued to carry wounded to the helicopter. Upon reaching the aircraft, he spotted and killed two enemy soldiers approaching at an angle that prevented the aircraft door gunner from firing upon them. He made one last trip to bring in the remaining wounded and to ensure that all classified material had been collected or destroyed. Only then did he allow himself to be pulled into the aircraft.