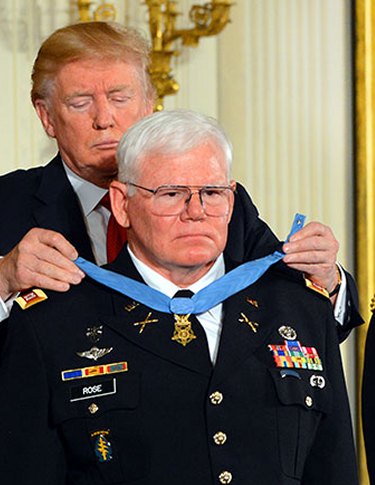 The President of the United States of America, authorized by Act of Congress, July 9, 1918 (amended by act of July 25, 1963), takes pleasure in presenting the Medal of Honor to (then) Sergeant Gary M. Rose, United States Army, for extraordinary heroism in action in connection with military operations involving conflict with an armed hostile force in the Republic of Vietnam while serving as a medical aidman with a company-size exploitation force, Command and Control (Central), Task Force 1, 5th Special Forces Group (Airborne), 1st Special Forces. On 12 September 1970, his company was engaged by a well armed hostile force. Enemy B-40 rockets and mortar rounds rained while the foe sprayed the area with small arms, automatic weapons, and machine gun fire, wounding many and forcing everyone to seek cover. One ally, was unable to reach protective shelter due to his weakened condition. Sergeant Rose, braving the bullet-infested fire zone, sprinted fifty meters to his downed comrade's side. The sergeant then used his own body to protect the casualty from further injury while treating his wounds. After stopping the blood flow from the wound, Sergeant Rose carried the man back through the bullet-ridden zone to protective cover. As the belligerents accelerated their attack, Sergeant Rose continued to disregard his own safety as he ran from casualty to casualty, administering emergency first aid. Suddenly, a B-40 rocket impacted just meters from Sergeant Rose, knocking him from his feet and inflicting wounds throughout his body. Ignoring his own pain, Sergeant Rose struggled to his feet and continued to administer medical treatment to the other injured soldiers. As night approached, the order was given to dig defensive slit trenches. Sergeant Rose, his own wounds yet untreated, worked tirelessly to excavate many trenches for the severely injured who were unable to dig their own, stopping only when all the casualties had been placed in safe positions. All through the night and into the next day, the foe pounded the allied force with a continuous barrage of B-40 rockets and mortars. Despite the deadly volleys falling around him, Sergeant Rose displayed a calm professionalism as he administered medical treatment to countless men; two were so severely wounded that they would have died without the sergeant's vigilant care. Finally, on 14 September, the company was successfully extracted from the embattled area by helicopter support ships. Sergeant Rose, though tired and wounded, refused evacuation until all other casualties were safely out of the area.